What Is An Amsler Grid? 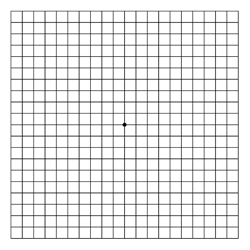 Developed in 1945 by a Swiss ophthalmologist by the name of Marc Amsler, an Amsler grid is made up of intersecting horizontal and vertical lines. The familiar appearance resembles a square of graph paper. The center point of the grid is marked by a dot. Traditionally, Amsler grids were made up of white lines on a black background. The color schematics used today are often the reverse, presenting as black lines on a white background. Black and red or blue and yellow color schematics have also been instituted.

What Is the Amsler Grid Used For?

The Amsler grid is a quick and simple diagnostic method for detecting changes in a patient's central vision, the field of vision that is utilized the most. It is responsible for the ability to clearly see objects directly in front of one's visual field, enabling such activities as reading, driving, watching television and recognizing colors, shapes and other visual characteristics of people or objects being viewed. The central area of the eye's retina, called the macula, is the part of the eye that is responsible for achieving normal central vision. As the macula deteriorates, disturbances in central vision occur. The Amsler grid was developed to detect these disturbances and serve as the first step toward confirming a diagnosis of macular degeneration.

Macular Degeneration: The Importance of Diagnosis and Monitoring

Macular degeneration is an age-related condition in which the macula no longer visualizes objects normally. This results in visual deficits that progressively worsen over time. Although total blindness rarely occurs and macular degeneration is painless, the condition can compromise one's quality of life as reading, driving and other daily activities that require central visual focus become increasingly difficult. The Amsler grid has provided a simple means for early detection of macular degeneration, prompting ophthalmologists to initiate additional tests and determine a treatment plan to slow down the progression of this disease. Many ophthalmologists advise patients with macular degeneration to take the Ansler grid test at home on a regular basis in order to monitor their vision. If the patient notices any changes, he or she can alert the ophthalmologist so that adjustments in treatment may be made. The goal behind utilizing the Ansler grid is to aid in preserving central visual capability for as long as possible.

How Does the Amsler Grid Work?

During the test, a patient with normal central vision will see a neat grid of straight, intersecting lines while focusing on the dot in the center of the grid. If, however, a patient sees lines that appear wavy or spaces within the grid where the lines are absent, these are central vision disruptions that are consistent with macular degeneration. Other abnormal perceptions include lines that are blurred, bent, broken or differ in color from the others, and boxes in different sizes and shapes.

How is the Amsler Grid Test Performed?

The Amsler grid test is just as easy and painless as reading lines of letters on the standard Snellen chart with which everyone is familiar. The grid may be printed out for testing at home. Whether performed by an ophthalmologist in his or her office or by the patient at home, the test is administered by carrying out the following steps.

When performed at home for monitoring purposes, the patient should use a separate sheet for each eye so that he or she can mark the distortions seen directly on the grid, exactly as he or she sees it. Dating each test and saving them in date order will make is easier to notice any changes that occur.

Does the Amsler Grid Detect Other Ocular Disorders?

The Amsler grid is used to detect any visual deficits that are caused by changes in the retina of the eye. Macular degeneration is the most common affliction, but other changes can result as well, including epiretinal membrane. The visual process that sends images to the brain can also be disrupted by compromises that affect the optic nerve. All of these scenarios affect the central visual field, which is evidenced by the results of the Amsler grid test. When a patient's test yields abnormal results, the ophthalmologist may order imaging tests of the eye in order to visualize all of the eye's internal structures. This allows him or her to pinpoint the cause of the visual disturbances, make a definitive diagnosis and determine the extent of illness so that an effective treatment can be initiated.

Although the Amsler grid test can be performed at home, it is not a substitute for routine comprehensive eye examinations, which should be performed by an optometrist or ophthalmologist at least every two years. Once an illness of the eye or a decrease in visual ability is detected, more frequent examinations may be recommended. The Amsler test offers an easy means for monitoring vision in between examinations, and it has also empowered ophthalmologists and patients alike to slow the effects of macular degeneration and maintain quality of life.